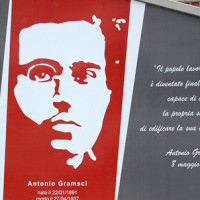 How the legacy of an obscure Italian Marxist came to motivate a Norwegian terrorist – and a Dutch politician.

First published in The Broker, 3 August 2011

What do a Norwegian terrorist, a rightist politician in The Netherlands, some American think tanks and an editor of The Broker share in common? They all assign an important role to the work of Antonio Gramsci in the making of contemporary politics.

Who but a few history buffs today has even heard of this Italian Marxist, who died in 1937 as a prisoner of the Fascist regime. Apparently Norwegian terrorist Anders Breivik has, and so has Martin Bosma, the spin doctor of the Dutch rightist party PVV, as well as William S. Lind, an American publicist and promoter of cultural conservatism.
The undersigned, now editor of The Broker, was once a devoted scholar of Gramsci. At the University of Amsterdam and also at York University in Toronto, Canada, I took part in exchanges among a group of International Relations students who identified themselves with ‘neo-Gramscian analysis’. I still consider the work of Gramsci a source of inspiration. In my view, Gramsci’s notes on power, in particular his concept of hegemony, and his historical analysis of state-society relations continue to bear relevance today.

So, when occasionally I come across a scholar or the rare journalist who refers to Grasmsci or uses a concept that derives from his work, I smile in recognition. Thus I smiled when I perused the book ‘The Pseudo-Elite of the Counterfeiters’ by Martin Bosma, a former journalist who is currently a prominent ideologue of the right in The Netherlands.

The book provides an account of how left-wing elites have risen to power since 1968, imposed multiculturalism on society and promoted ‘mass immigration’ – while casting a blind eye to the ‘dangers of Islam’. According to Mr Bosma it was Gramsci’s concept of cultural hegemony that taught leftists it was ‘better to seize power in the institutions of society, and thus dominate culture and political discourse’ rather than to stage a coup d’état.

When reading Mr Bosma’s book, which was published last year, I figured he might have picked up his share of Gramscian concepts at the University of Amsterdam. He studied political science there in the 1980s – about the same time as I did. At that time, though, we employed Gramsci’s concept of hegemony to understand the rise of neoliberalism rather than multiculturalism. In my view, multiculturalism has never been a hegemonic world view, and certainly not in Europe – not even at universities.

Therefore I was not prepared to stumble upon an identical application of Gramsci’s concept of hegemony in the bewildering manifesto ‘2083, A European Declaration of Independence’ released by Norwegian terrorist Anders Breivik just before he set out on his killing spree. Similar to Mr Bosma, the author of this document asserts that Gramsci’s work has inspired leftists since the late 1960s to focus their revolutionary aspirations on seizing power in the fields of education and culture. Indeed, the author considers Gramsci as the forebear of ‘a generation of “Cultural Marxist radicals” [that] has now become the establishment in the vast majority of our institutions of higher learning’.

Mr Bosma and the author of Mr Breivik’s manifesto also share in a sweeping explanation on how ‘cultural Marxism’ spread throughout Europe and the US, and why the left-wing elites it informed promote multiculturalism. In this explanation, a whole host of other European Marxists figure alongside Gramsci, including the Hungarian Georg Lukács, and a group of German Marxists that convened in Frankfurt in the 1930s – hence the Frankfurt School as short-hand for their ideas. As this group was forced to move to Geneva and later to New York in the wake of Hitler’s rise to power, their ideas spread and found a following among leftists on both continents. According to both authors, most prominent among these ideas was ‘cultural relativism’, including a rejection of nationalism and deference for minority cultures. In the eyes of leftists, Mr Bosma laments, ‘nationalism or even asserting the unique traits of one’s own culture, is by definition suspect’. Similarly, Mr Breivik complains that ‘nationalists in Western Europe are systematically being ridiculed, silenced and persecuted by the current cultural Marxist/multiculturalist political establishments’.

One of the things that puzzles me in the accounts of both authors is why they consider all these European Marxists the fathers of cultural relativism. After all, the founder of cultural relativism is the American anthropologist Franz Boas (1858-1942). A German by origin, Boas was a staunch critic of nationalism and racism, but he is not generally considered a Marxist. And in my readings at university, Marxists, including contemporary bearers of the Frankfurt School such as Jürgen Habermas, were usually on the receiving end of cultural relativist criticism. No so for Mr Bosma and Mr Breivik: for both authors, ‘cultural Marxism’, ‘cultural relativism’ ‘multiculturalism’ as well as ‘political correctness’ are practically interchangeable; they are merely terms for the dominant view, imposed on society by the leftist establishment.

In view of the striking similarities, one is easily persuaded to conclude that Mr Breivik’s and Mr Bosma’s accounts of the roots of multiculturalism use the same sources. Unfortunately, neither of the authors is very generous with footnotes in this respect. Yet Mr Breivik, so it turns out, is a shameless plagiarist. Most of his account is literally copied from articles authored by William S. Lind, an American publicist, and other self-proclaimed ‘cultural conservative’ activists associated with think tanks such as the Free Congress Foundation.
In the world view promoted by these radical conservatives in the US since the early 1990s, the country’s elite has pursued a ‘deliberate agenda’ to rob ordinary Americans of their culture. Disguised as ‘multiculturalism’ or ‘political correctness’, this agenda is in fact a strand of cultural Marxism that, as Mr Lind explains, started in Europe with Gramsci and Lukács and was brought to American universities by the Marxists of the Frankfurt School (Lind, ‘The Origins of Political Correctness’, 2000). According to Mr Lind and other radical conservatives such as Patrick J. Buchanan, the ultimate objective of that agenda is nothing less than ‘the destruction of Western culture and the Christian religion’ (Lind, ‘Who stole our culture’, 2007) by means of propaganda, education, family planning, and unchecked immigration.

It is thus from the same sinister account, promoted by American conservatives, of a global Marxist conspiracy that spans almost a century, from which both Mr Bosma and Mr Breivik have derived inspiration for their mission. Of course that doesn’t make the Dutch politician an accessory to the atrocities committed by the Norwegian terrorist. But I do believe it is safe to say that Mr Bosma would recognise himself in Mr Breivik’s self-description as merely ‘a dedicated cultural conservative’ who seeks to save his nation from ‘cultural suicide’ and ‘Islamic colonisation’.